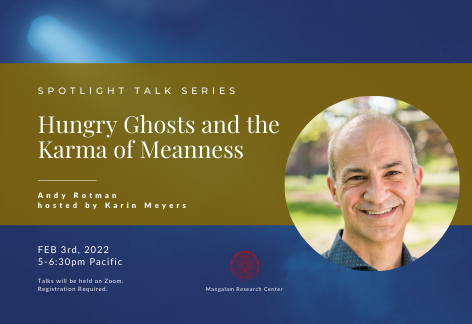 Hungry Ghosts and the Karma of Meanness

Join the conversation as Mangalam Research Center’s Academic Director, Karin Meyers interviews Andy Rotman about his recent book, Hungry Ghosts (Wisdom Publications, 2021). The book shows how an understanding of the meanness (mātsarya) that afflicts hungry ghosts illuminates the human condition, offering insight and inspiring compassion for readers in ancient times and today. We will discuss the moral world of hungry ghosts, how one can avoid their terrible fate, and what representations of hungry ghosts can tell us about Buddhist communities around the world.

Bio: Andy Rotman (he/him) is a professor of Religion, Buddhism, and South Asian Studies at Smith College. He has been engaged in textual and ethnographic work on religious and social life in South Asia for more than twenty-five years. His publications include Divine Stories: Divyāvadāna, Part 1 and Part 2 (Wisdom Publications, 2008 and 2017), Thus Have I Seen: Visualizing Faith in Early Indian Buddhism (Oxford University Press, 2009), and a coauthored volume, Amar Akbar Anthony: Bollywood, Brotherhood, and the Nation (Harvard University Press, 2015).